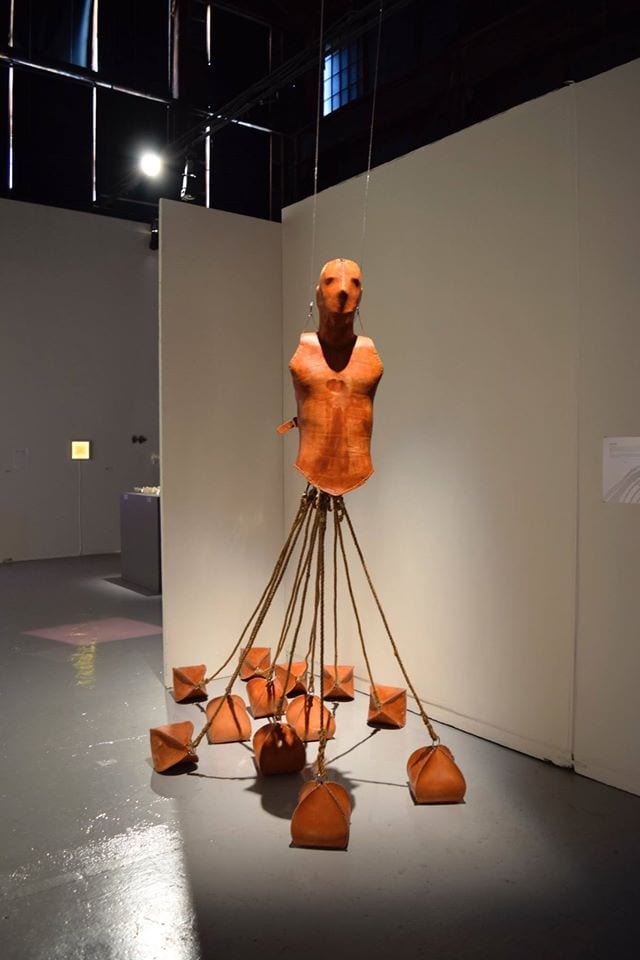 The Harbinger, whether a person or thing, is the sign of an impending event. The performance symbolizes the messenger shedding his skin. It highlights the performer’s desire to move forward, no matter what force pulls backwards; the desire to contradict the laws of motion through passion.

In the two-hour durational performance, the viewers were allowed to participate by attaching or removing 300 hundred pounds in weights onto the leather carapace.

Lorenzo Cardim is a Brazilian visual artist and dancer based in San Francisco, CA and Washington, D.C. He received a BFA in Fine Arts from the Corcoran College of Art + Design in 2014 while concurrently studying with the Maida Withers Dance Construction Company.

Cardim has recently graduated from California College of the Arts (CCA) in San Francisco with a Master of Fine Arts degree.

Cardim’s artistic practice explores human connectivity, social constructs and gender fluidity. His practice is informed by his research into art history, gender politics and philosophy. His work has been featured nationally and internationally in galleries, universities, and film festivals in San Francisco, Oakland, Washington, DC, New York, and Milan, Italy.

Curatorial projects include Fools! Kings, Clowns and Revolutionaries, a look at the intersection of bodily movement and sculpture in the work of Paul McCarthy, Mike Kelly, David Page, Jessika Tarr, Ellen Durkin, and the Wear, Strut, Occupy class. The show was exhibited at the Corcoran Gallery of Art in Washington, D.C. (2014).

Awards and scholarships include CCA Diversity Scholarship, Finalist in the Barclay Simpson Award, Award for Artistic Excellence from the Italian Cultural Institute (2013), Outstanding Achievement Award (2013), the Lolo Sarnoff Prize in Sculpture (2012), and Emerging Leader Award (2012). Cardim was also twice awarded the Sally Wolfe Memorial Scholarship for Outstanding Achievement (2014 and 2011). His work was selected from among the region’s 2014 BFA and MFA recipients by curator Jamie Smith, Ph.D., of Connersmith gallery in Washington, D.C. for inclusion in Academy 2014. He performed The Harbinger for the exhibition.