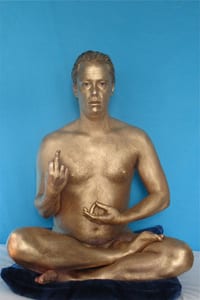 Writer/performer Kirk Read and musician Jeffrey Alphonsus Mooney create an evening of stories about sex work, hallucinations and the apocalypse. Read learned to perform in a touring Virginia evangelical youth group, with some in his hometown expecting him to become a preacher. Instead, Read became an escort and an avowed fan of magic mushrooms. In short, Read is a different sort of preacher. Read’s stories weave in and out of Mooney’s soundscape, creating an atmosphere of magical trance. Read’s humor and acute observation, together with Mooney’s trippy, layered music will take you to church. Expect to hear stories about a 450 pound sex work client, the surly employees at Guitar Center, teenage Satanism, touring through rural Alabama with strippers and praying in public.

Kirk Read is the author of “How I Learned to Snap” and the upcoming essay collection “This is the Thing.” He cohosts the open mics Smack Dab and K’vetsh and has toured the United States a number of times as a performer, most recently with the Sex Workers Art Show. He’s worked at St. James Infirmary, a free clinic for sex workers. He is the director of Army of Lovers, a project to nurture art by queer male performers, which is a project of Queer Cultural Center. He can be found at wwwkirkread.com

Jeffrey Alphonsus Mooney has been a culture worker and artist for over twenty years. He was a fixture at the legendary 848 Divisadaro Community Space and has collaborated with visionaries like Starhawk, Keith Hennessy, Jess Curtis, Sara Shelton Mann and Suzanne Sterling. He performs and teaches rhythm classes with the Bay Area pagan group Reclaiming and at Witch camps around the country.He has collaborated with Kirk Read, Sean Dorsey and played drums with Shawna Virago.