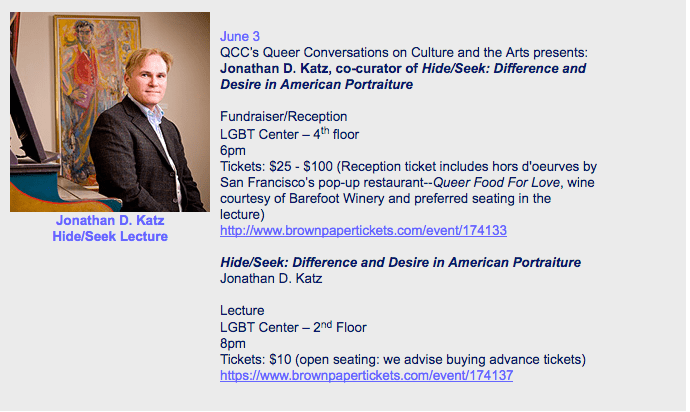 QCC’s Queer Conversations on Culture and the Arts presents:
Jonathan D. Katz, co-curator of Hide/Seek: Difference and Desire in American Portraiture
A Fundraiser/Reception and Lecture

Meet Jonathan D. Katz at a pre-lecture reception to benefit the Queer Cultural Center’s Lecture series, Queer Conversations on Culture and the Arts (QCCA), a series of lectures co-presented by Qcc and the California College of the Arts. QCCA brings together locally and nationally renowned artists, writers, filmmakers, and scholars for a series of conversations to discuss a broad range of LGBTQI topics in the humanities and the arts.

In late October, The Smithsonian’s National Portrait Gallery presented Hide/Seek: Difference and Desire in American Portraiture,” the first major museum exhibition showing how the questions of gender and sexual identity have dramatically shaped the creation of modern American portraiture.

Jonathan D. Katz, director of the doctoral program in visual studies, State University of New York at Buffalo, will discuss his role as co-curator and will consider such themes as sexual difference in depicting modern Americans; how artists have explored the definition of sexuality and gender; how major themes in modern art—especially abstraction—were influenced by this form of marginalization and how art reflected society’s changing attitudes.

The exhibition begins with late 19th-century works by Thomas Eakins and John Singer Sargent and charts 20th-century portraiture with 105 major works by masters, including Romaine Brooks, George Bellows, Marsden Hartley and Georgia O’Keeffe. It continues through the postwar period with works by Jasper Johns, Robert Rauschenberg, Agnes Martin and Andy Warhol. The exhibition addresses the impact of the Stonewall Riots of 1969, the AIDS epidemic and the advent of postmodernist attention to identities, indicating how portraiture repeatedly negotiated seismic shifts in American culture and society. The exhibition continues through the end of the 20th century with major works by artists such as Keith Haring, Glenn Ligon, Nan Goldin, Felix Gonzalez-Torres, David Wojnarowicz and Catherine Opie.

Hide/Seek: Difference and Desire in American Portraiture surveys more than 100 years of compelling expressions of American art and reveals another layer of American social history, one that greatly influenced these artists’ work and American art as a whole.

This QCCA program was funded by a generous donation from Dr. Marcy Adelman. 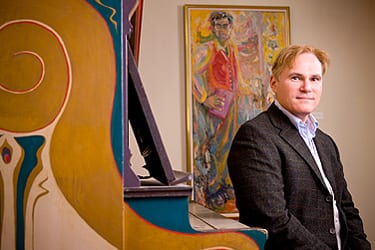